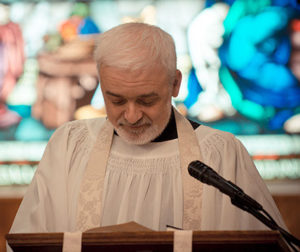 St. Brice’s Church was founded in 1917, under the name of St. Simon, as a mission church of St. John’s Church in North Bay to meet the needs of members of the congregation who wished to attend services conducted in a higher church tradition. The new community thrived under the leadership of the first incumbent, the Rev. William Archer Hankison, and St. Simon’s became a separate parish in 1928.

In 1930 the original church building was sold. Construction of a new building started in 1932, financed with the help of a generous donation from the Rudd family in England. Until the new building was opened in 1933 services were held in the church hall. At this time the name was changed to St. Brice’s in accordance with the wishes of the Rudd family. This church is dedicated to St. Britius (St. Brice), in loving memory of William Ferris Rudd, Captain Royal Welsh Fusiliers, who fell, leading his men for King and Country, at Serre, in France, November 13th, 1916, at age 29. Also in loving memory of William Ferris Rudd’s father and mother. Twice each year the Rudd family is still remembered during the Sunday service.

Over the last thirty seven years the church complex has been enlarged and renovated. In 1976 a narthex was added to the front of the building. In 1987 a link was constructed between the narthex and the church hall. In 2001, the seating capacity in the main church was increased and the narthex and link to the hall were renovated. Recently, both the church and hall have undergone major renovations in order to comply with Fire Department Regulations. The church now has a narthex, offices, reading room, and a large church hall linked to the narthex.